Watch The Rugby, It Will Make You Feel Good 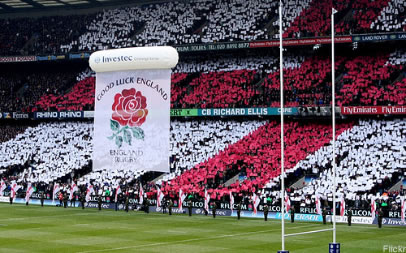 Being working class and from the North I should probably be a Rugby League man, but I’m not. To be truthful I don’t really like Rugby of any ilk, I don’t even understand the rules. Yet there is something about the six-nations that makes the hairs on the back of my neck stand up, something that provokes a greater sense of patriotism and pride than football or cricket ever can.

It’s not the sport in itself. That just consists of some running back and forth, a lot of writhing around on the floor, and the occasional break to sniff each others armpits for reasons I cannot fathom. No, what inspires me is the magnitude of the event itself, the sense of occasion. I don’t know if it’s the fans, the stadia, the rivalry, or the significance that makes it so, but for me it is the most epic of sporting occasions.

Take football’s World Cup final, or the Champions League final for that matter. Half the ground is filled by corporate freeloaders with about as much interest as a post-recession savings account. They dilute the passion and energy of the real supporters, as do the ludicrous ticketing policies. Fans are dispersed around the stadium in tiny pockets, creating an atmosphere more suited to an athletics meet than a game of football.

These are the biggest events of the most popular team sport in the world, a sport built on rivalries, passion and togetherness. Yet it has been allowed to descend towards a glorified exhibition match for the viewing pleasure of the rich and famous, oh and a few lucky competition winners.

International rugby union still retains that genuine feel that makes great sporting events so special. Be it Murrayfield or Twickenham, Cardiff or Rome, the sentiment will be the same, one of overpowering home support. Intimidating cauldrons of boiling passion breathe life into the occasion and set the perfect scene for an epic battle.

And rugby union truly is an epic battle. It’s a much overused phrase in sport, a footballer is said to ‘lead his team into battle’ or a tennis star might have ‘a real battle on their hands’. Is it really a battle in the literal sense though? Mentally, technically, and even physically maybe, but I have always felt rugby comes remarkably close to resembling the real thing.

It evokes images of William Wallace, of Richard the Lionheart. The violent clashes, surging charges and the battles for ground mimic the historical events that shaped our part of the world. It’s this deep rooted history between the competing nations that gives these fixtures that edge. In other sports rivalries are less entrenched, they are more often than not born out of the sport itself. Rugby promotes nationalism in a positive way and the six nations is an occasion to reclaim the flag from the bigoted fascists.

I will spend the coming weeks enjoying the spectacle knowing full well that I will be no nearer to understanding the rules than I am now. Nor will I develop any interest whatsoever in the domestic game. But it will make me proud and that is a great feeling. I urge you to join me.

Here are a few videos to wet your appetite….